In the wake of Hurricane Katrina, longtime New Orleans residents Abdulrahman and Kathy Zeitoun are cast into an unthinkable struggle with forces beyond wind and water. In the days after the storm, Abdulrahman traveled the flooded streets in a secondhand canoe, passing on supplies and helping those he could. A week later, on September 6, 2005, Zeitoun abruptly disappeared-- arrested and accused of being an agent of al Qaeda. 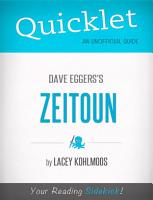 Quicklets: Your Reading Sidekick! ABOUT THE BOOK Zeitoun is both a a scathing condemnation of Bush-era policies and the egregious mishandling of the Hurricane Katrina recovery and a story of one familys undying faith and strength in the face of disaster. Abdulrahman Zeitoun known simply as Zeitoun is a prosperous Syrian-American in New Orleans when Hurricane Katrina hits in 2005. Although his wife, Kathy, and their four children evacuate before the storm hits, Zeitoun stays behind to care for their house, business, and rental properties. When he awakens the day after the hurricane hit to see an ocean of clear blue water covering much of his neighborhood, Zeitoun realizes that the levees have been breached. Instead of immediately seeking evacuation, he stays in the city to help his stranded neighbors. Paddling around in an old canoe, Zeitoun pulls the elderly from the water, delivers food and water, and transports people to evacuation sites. In return, he is arrested and incarcerated, first in a Guantanamo-like compound and then in a maximum security prison. He is never read his rights. He is never given a phone call. He is called a terrorist and treated like an animal. MEET THE AUTHOR Lacey is a writer, traveler and lover of the arts. After graduating from the University of Virginia with a BA in Drama & the Studies of Women and Gender, the only thing she knew for sure was that she wanted to travel. So, she embarked on a 10 12 month round-the-world trip. Lacey then traveled to Costa Rica where she spent one year teaching elementary school English in a small mountain town. Throughout her two years of travels, she has always kept a blog. EXCERPT FROM THE BOOK On August 25, 2005, the balmy New Orleans day starts out like it always does for the Zeitoun family with a constantly ringing phone and the bustle of getting the kids off to school on time. As he pulls out to attend to the needs of his painting contractor business, Abdulrahman Zeitoun is not even thinking of the tropical storm off the coast of Florida. As Kathy savores half an hour of solitude after dropping her four children off at school, the storm is just a tiny nagging worry in the back of her mind. Abdulrahman Zeitoun was born in Jableh, Syria, but spent most of his early adult life working on ships all over the world before settling down in New Orleans. Finding that his first name was difficult for Americans to pronounce, his new country and adopted home came to know him simply as Zeitoun. Zeitouns wife, Kathy, was born in Baton Rouge to a large Christian family. After a tough divorce that essentially left her a single mother in her early twenties, she converted to Islam. Buy a copy to keep reading! CHAPTER OUTLINE Quicklet on Dave Egger’s Zeitoun + Introduction + About Dave Eggers + Overall Summary + List Of Important People + ...and much more