From joining our allies on the battlefields of World War I to looking at how our nation has grown and changed since Confederation, The story of Canada: a Century of change outlines an era shaped by struggle and technology. It begins with World War I and moves forward to the Winnipeg Strike, the development of aircraft, cars, and hydroelectricity, the Depression, women's suffrage, World War II, immigration, separatism, the women's rights movement, the environment, multiculturalism, and the struggle of Canada's First Peoples for self-government.

The first biography of the great black actor, activist, athlete--and tragic victim of the blacklist Imagine an actor as familiar to audiences as Denzel Washington and Morgan Freeman are today--who is then virtually deleted from public memory. Such is the story of Canada Lee. Among the most respected black actors of the forties and a tireless civil rights advocate, Lee was unjustly dishonored, his name reduced to a footnote in the history of the McCarthy era, his death one of a handful directly attributable to the blacklist. Born in Harlem in 1907, Lee was a Renaissance man. A musical prodigy on violin and piano at eleven, by thirteen he had become a successful jockey and by his twenties a champion boxer. After wandering into auditions for the WPA Negro Theater Project, Lee took up acting and soon shot to stardom in Orson Welles's Broadway production of Native Son, later appearing in such classic films as Lifeboat and the original Cry, the Beloved Country. But Lee's meteoric rise to fame was followed by a devastating fall. Labeled a Communist by the FBI and HUAC as early as 1943, Lee was pilloried during the notorious spy trial of Judith Coplon in 1949, then condemned in longtime friend Ed Sullivan's column. He died in 1952, forty-five and penniless, a heartbroken casualty of a dangerous and conflicted time. Now, after nearly a decade of research, Mona Z. Smith revives the legacy of a man who was perhaps the blacklist's most tragic victim.

Recipient of the Banff Mountain Book Festival's Canadian Rockies Award A book to be read and digested, then sampled, then read and dipped into often a fine achievement for this dedicated author Bruce Fairley,Canadian Alpine Journal HOLY SHIT WAAAAAAAAAT A FABBBBBULOUS TOME. Tami Knight, Illustrator/Mountaineer This important new book tells the story of Canada's 200-year mountaineering history. Through the use of stories and pictures, Chic Scott documents the evolution of climbing in Canada. He introduces us to the early mountain pioneers and the modern day climbing athletes; he takes us to the crags and the gyms, from the west coast to Québec, and from the Yukon to the Rockies. But most importantly, Scott showcases Canadian climbers-the routes that challenged them, the peaks that inspired them, their insatiable desire to climber harder, to push the limits. Begin the trek through Canada's climbing history Learn about Swiss guides hired by CPR hotels who ushered in the glory years of first ascents. Continue through to the turn of the twentieth century when British and American climbers of leisure found themselves hampered by the difficulties of travel through the Canadian wilderness. Learn about the European immigrants of the 1950s who pushed the limits on the rock walls, and the American superstars who led the search for frightening new routes on the big north faces. Be there when British expatriates pioneer an exciting new trend in world mountaineering-waterfall ice climbing. Witness the popular growth of sport climbing, both on the crags and in the gyms. Finally, enjoy the story of home-grown climbers. Initially slow to take up the challenge, both at home and overseas, they are now leaders in the climbing world.

Excerpt from The Story of Our Country: A History of Canada for Four Hundred Years Through the shaded aisles of a primeval forest. Over thousands of miles of lake and river and wilderness echo the sounds of that hun dred years of war between the French and English for the possession of this continent. Out of these struggles develop the striking inci dents of the Revolutionary period and the first conﬂict for Canadian independence; out of the new condition of affairs then created come the memories of a war in 1812 which was fought for freedom as fully, and marked by episodes as heroic. As ever were the conﬂicts of ancient Greek or modern Swiss. About the Publisher Forgotten Books publishes hundreds of thousands of rare and classic books. Find more at www.forgottenbooks.com This book is a reproduction of an important historical work. Forgotten Books uses state-of-the-art technology to digitally reconstruct the work, preserving the original format whilst repairing imperfections present in the aged copy. In rare cases, an imperfection in the original, such as a blemish or missing page, may be replicated in our edition. We do, however, repair the vast majority of imperfections successfully; any imperfections that remain are intentionally left to preserve the state of such historical works.

In the tradition of John Vaillant’s modern classic The Golden Spruce comes a story of the unlikely survival of one of the largest and oldest trees in Canada. On a cool morning in the winter of 2011, a logger named Dennis Cronin was walking through a stand of old-growth forest near Port Renfrew on Vancouver Island. He came across a massive Douglas fir the height of a twenty-storey building. Instead of allowing the tree to be felled, he tied a ribbon around the trunk, bearing the words “Leave Tree.” The forest was cut but the tree was saved. The solitary Douglas fir, soon known as Big Lonely Doug, controversially became the symbol of environmental activists and their fight to protect the region’s dwindling old-growth forests. Originally featured as a long-form article in The Walrus that garnered a National Magazine Award (Silver), Big Lonely Doug weaves the ecology of old-growth forests, the legend of the West Coast’s big trees, the turbulence of the logging industry, the fight for preservation, the contention surrounding ecotourism, First Nations land and resource rights, and the fraught future of these ancient forests around the story of a logger who saved one of Canada's last great trees. 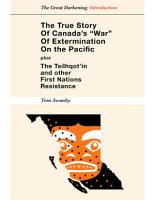 At the inception of colonial rule on Canada’s Pacific Coast, natives “universally believed” Governor Douglas used smallpox as a weapon to kill them in lieu of treaties or paying for land. Yet Canadian historians routinely dismiss this profound allegation without mention. In Canada’s greatest catastrophe, perhaps 100,000 B.C. natives died from smallpox during 1862/63. Before then, the First Nations were still sovereign. Afterward, British Columbia subjugated and dispossessed the depopulated First Nations through small wars billed as policing and by hanging several natives resisting colonialism. This is a detective story. It begins with the last action of the smallpox period, the hanging of five Tsilhqot’in Chiefs ambushed at a peace conference in 1864. The book then follows the smallpox trail back though the Tsilhqot’in War seeking its origin. It describes the smallpox carnage everywhere while seeking evidence of deliberate disease spreading. Does this trail lead to the Governor’s office as alleged?

In Missed Opportunities, Marc Raboy reveals the short-sightedness behind the traditional view of Canadian broadcasting policy as an instrument for promoting a national identity and culture. He argues that Canadian broadcasting policy has served as a political instrument for reinforcing a certain image of Canada against insurgent challenges, such as maintaining the image of Canada as a political entity distinct from the United States and acting against internal threats, most notably from Quebec. It has served as a vehicle for the development of private broadcasting industries and to further the general interests of the Canadian state. Most of the time, Raboy maintains, this policy has been the object of vigorous public dispute.