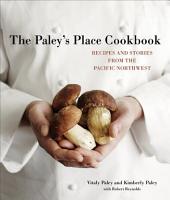 With an unquenchable ardor for local, luscious, sustainably produced food and drink, Vitaly and Kimberly Paley bring their elegant, soulful fare home in The Paley's Place Cookbook. Nestled in a converted Victorian in Portland's trendy Northwest District, Paley's Place Bistro and Bar has been serving Vitaly Paley's creative, beautifully executed cooking for over a decade. Co-owner Kimberly Paley's joyous hospitality has helped make their restaurant into a West Coast destination. Now, The Paley's Place Cookbook teaches you to create blissfully perfect dishes from the ground up, whether simple (Grilled Figs Wrapped in Prosciutto; Tomato-Bread Soup) or showy (Duck Wellington with Mole Sauce; Vegetable-Stuffed Morels with Green Garlic Confit and Parmesan Cream), the authors emphasize the building blocks of wonderful food: great ingredients and great technique. Chapters on appetizers; soups, salads, and sandwiches; pastas and grains; fish and shellfish; meat, game, and fowl; vegetable side dishes; and desserts are complemented by extras, including a primer on putting together a knockout Oregon cheese course and a bevy of recipes for hand-crafted and seasonal cocktails. Wine pairings point the reader to well-matched styles and makers from the Pacific Northwest and France. Throughout the book, the Paleys introduce us to some of the many skilled food producers who make the Pacific Northwest a culinary treasure trove, and also take us inside the chef's thought process as he creates and refines his recipes. Evocative photographs—of finished dishes, gorgeous local foodstuffs, and the people who produce the food that gives so much pleasure—round out this personal, passionate, enlightening, and utterly delicious cookbook. 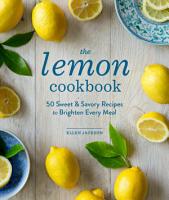 Lemons add a fresh, tangy burst of flavor to both sweet and savory dishes and have a way of making all the other ingredients in a dish shine. From savory meals like Meyer Lemon Risotto with Dungeness Crab Tarragon, and Créme Fraîche, to sweet treats like Lemon Buttermilk Panna Cotta with Lemon Verbena and Blackberries, here are delicious recipes featuring the bright flavor of lemons. Inexpensive, easy to find, and simple to cook with, they’re also good for you, containing a hit of vitamin C. What’s not to love? 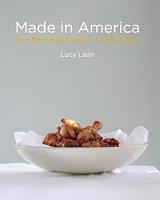 Features updated classic recipes from chefs across the county with an introduction that includes the background and origin of the dish and a profile of the chef. 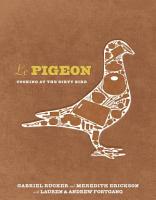 This debut cookbook from James Beard Rising Star Chef Gabriel Rucker features a serious yet playful collection of 150 recipes from his phenomenally popular Portland restaurant. In the five years since Gabriel Rucker took the helm at Le Pigeon, he has catapulted from culinary school dropout to award-winning chef. Le Pigeon is offal-centric and meat-heavy, but by no means dogmatic, offering adventures into delicacies unknown along with the chance to order a vegetarian mustard greens quiche and a Miller High Life if that's what you're craving. In their first cookbook, Rucker and general manager/sommelier Andrew Fortgang celebrate high-low extremes in cooking, combining the wild and the refined in a unique and progressive style. Featuring wine recommendations from sommelier Andrew Fortgang, stand-out desserts from pastry chef Lauren Fortgang, and stories about the restaurant’s raucous, seat-of-the-pants history by writer Meredith Erickson, Le Pigeon combines the wild and the refined in a unique, progressive, and delicious style. 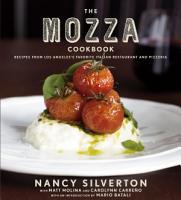 Winner of the 2014 James Beard Award for Outstanding Chef: the top chef in the country A traditional Italian meal is one of the most comforting—and delicious—things that anyone can enjoy. Award-winning chef Nancy Silverton has elevated that experience to a whole new level at her Los Angeles restaurants Osteria Mozza and Pizzeria Mozza, co-owned with restaurateurs Mario Batali and Joe Bastianich. A reservation at Mozza has been the hottest ticket in town since the restaurants opened and diners have been lining up for their wildly popular dishes. Finally, in The Mozza Cookbook, Silverton is sharing these recipes with the rest of the world. The original idea for Mozza came to Nancy at her summer home in Panicale, Italy. And that authentic Italian feel is carried throughout the book as we explore recipes from aperitivo to dolci that she would serve at her tavola at home. But do not confuse authentic with conventional! Under Silverton’s guidance, each bite is more exciting and delectable than the last, with recipes such as: Fried Squash Blossoms with Ricotta Buricotta with Braised Artichokes, Pine Nuts, Currants, and Mint Pesto Mussels al Forno with Salsa Calabrese Fennel Sausage, Panna, and Scallion Pizza Fresh Ricotta and Egg Ravioli with Brown Butter Grilled Quail Wrapped in Pancetta with Sage and Honey Sautéed Cavolo Nero Fritelle di Riso with Nocello-soaked Raisins and Banana Gelato Olive Oil Gelato In the book, Nancy guides you through all the varieties of cheese that she serves at the Mozzarella Bar in the Osteria. And you’ll find all the tricks you need to make homemade pastas, gelato, and pizzas that taste as if they were flown in directly from Italy. Silverton’s lively and encouraging voice and her comprehensive knowledge of the traditions behind this mouthwateringly decadent cuisine make her recipes—both familiar and intricate—easy to follow and hard to resist. It’s no wonder it is so difficult to get a table at Mozza—when you’re cooking these dishes there will be a line out your door as well.

The world’s bestselling travel book is back in a more informative, more experiential, more budget-friendly full-color edition. A #1 New York Times bestseller, 1,000 Places reinvented the idea of travel book as both wish list and practical guide. As Newsweek wrote, it “tells you what’s beautiful, what’s fun, and what’s just unforgettable— everywhere on earth.” And now the best is better. There are 600 full-color photographs. Over 200 entirely new entries, including visits to 28 countries like Lebanon, Croatia, Estonia, and Nicaragua, that were not in the original edition. There is an emphasis on experiences: an entry covers not just Positano or Ravello, but the full 30-mile stretch along the Amalfi Coast. Every entry from the original edition has been readdressed, rewritten, and made fuller, with more suggestions for places to stay, restaurants to visit, festivals to check out. And throughout, the book is more budget-conscious, starred restaurants and historic hotels such as the Ritz,but also moderately priced gems that don’t compromise on atmosphere or charm. The world is calling. Time to answer.

“He is to American broadcasting as Carnegie was to steel, Ford to automobiles, Luce to publishing, and Ruth to baseball,” wrote The New York Times of Willian S. Paley—the man who built CBS, the “Tiffany Network.” Sally Bedell Smith’s In All His Glory takes a hard look at Paley and the perfect world he created for himself, revealing the extraordinary complexity of the man who let nothing get in the way of his vast ambitions. Tracing his life from Chicago, where Paley was born to a family of cigar makers, to the glamorous haunts of Manhattan, Smith shows us the shrewd, demanding egoist, the hedonist pursuing every form of pleasure, the corporate strongman famous for his energy and ruthlessness. Drawing on highly placed CBS sources and hundreds of interviews, and with a supporting cast of such glittering figures as Truman Capote, Slim Keith, Jock Whitney, Ted Turner, David Sarnoff, Brooke Astor and a parade of Paley’s humiliated heirs, In All His Glory is a richly textured story of business, power and social ambition. Praise for In All His Glory “A sweeping study of the emergence of broadcasting, the American immigrant experience, and the ravenous personal and professional tastes of Paley as he charmed and clawed his way to the top of society.”—Los Angeles Times “Riveting…packed with revelations, rich in radio and TV lore, sprinkled with intrigues, glitz, and wheeling and dealing at the highest levels of media and government.”—Publishers Weekly “An impressive, meticulously researched work of broadcast history as well as a piquant glimpse inside CBS’s corporate culture.”—Time 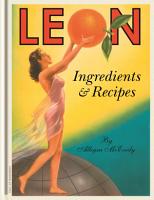 'Leon serves food that is fresh, seasonal, locally sources and really good. The twist is that your food is served really fast. The double twist is how delicious it is.' - Vogue The first Leon restaurant, in London's Carnaby Street, opened its doors in July 2004. For its founders - Henry Dimbleby, John Vincent and Allegra McEvedy - the aim was to change the face of fast food, by bringing fresh, wholesome cooking to the high street. Six months later, Leon was named the Best New Restaurant in Great Britain at the Observer Food Monthly Awards. The menu is based around bold flavours, using simply-cooked fresh, local, natural ingredients with an emphasis on seasonal dishes; it also reflects how our eating habits change as the daylight house get longer and shorter. This is a book of two halves. The Ingredients Book arms you with everything you need to know about the basic building blocks of any recipe. LEON chooses its ingredients above all for their flavour and healthiness but also with a view to the world we live in, so that such shark-infested waters as sustainable fish are tackled and easy to navigate. LEON's top 250 fruits, vegetables, fish, meats, dairy and store cupboard ingredients are all given their own entries. Nutrition, a bit of history, flavour and the best way to get the most out of them are all covered, seasoned with a fair amount of random miscellany. The second half is The Recipe Book, where you can put your newly found knowledge of ingredients to great use with over 140 recipes: some are familiar favourites taken from LEON's menus such as the Original Superfood Salad, Moroccan Meatballs or Magic Mackerel Couscous and, for LEON Lovers everywhere, at last a recipe for the coveted LEON Better Brownie. Plus there are some recipes from the founders, their friends and those who helped make LEON what it is today, like Fred's Millennium Octopus and David Dimbleby's Spanish Omelette. LEON's food message is a simple and honest one - cook and eat with the best ingredients available and don't forget the naughty bits that are so necessary for a fully-rounded life.

"An exploration of the many facets of the global history of Jewish food when Jews struggled with, embraced, modified, or rejected the foods and foodways which surrounded them, from Renaissance Italy to the post-World War II era in Israel, Argentina and the United States"--