Available again after a long absence! The Moto Guzzi Sport & Le Mans Bible celebrates the iconic Moto Guzzi V7 Sport and Le Mans sporting motorcycles of the 1970s and 1980s, telling the story of these classic bikes, among the first Superbikes to combine Italian style, handling and performance. After struggling to survive during the 1960s, Lino Tonti was given the opportunity to create the V7 Sport Telaio Rosso, in 1971; this was so successful that Moto Guzzi again began to concentrate on building sporting motorcycles. When Alessandro de Tomaso acquired the company, the future for Moto Guzzi twins looked bleak – until the 850 Le Mans was released in 1975. Like the V7 Sport, the Le Mans was a class leading sporting motorcycle and continued into production throughout the 1980s. After the Le Mans II of 1978, Le Mans III of 1980, the Le Mans IV of 1984, and the Le Mans V of 1988, although no longer a cutting-edge sports bike, the final Le Mans successfully managed to combine traditional attributes with modern conveniences. Covering the period 1971-1993 and all models (V7 Sport, 750S, 750S3, 850 Le Mans, 850 Le Mans II, 850 Le Mans III, 1000 Le Mans IV, 1000 Le Mans V) and with description of model development year by year, full production data and 160 photos, this is a highly informative book and an essential Bible for enthusiasts. Author and renowned motorcycle expert, Ian Falloon, has a wealth of experience, numerous books to his name, and a small collection of sporting motorcycles – including a 1973 Moto Guzzi V7 Sport. His other books include The Moto Guzzi Story, The BMW Story and The Ducati 750 Bible. 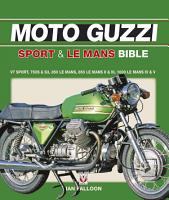 This book contains a year-by-year account of Lino Tonti's development and evolution of the V7 Sport into the stylistic 850 Le Mans.

Having this book in your pocket is just like having a real marque expert at your side. Benefit from Ian Falloon’s years of experience, learn how to spot a bad bike quickly, and how to assess a promising bike like a professional. This is the complete guide to choosing, assessing and buying the Moto Guzzi big twin of your dreams. 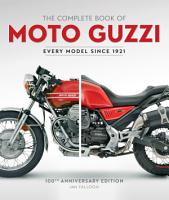 The Complete Book of Moto Guzzi: 100th Anniversary Edition, Every Model Since 1921, written by respected motorcycle expert Ian Falloon, offers enthusiasts a thorough review of Guzzi’s storied 100-year history via all of its production models. The oldest European motorcycle manufacturer in continuous production, Italy's Moto Guzzi has built some of the most iconic motorcycles ever produced. Established in 1921, the company is one of the most traditional motorcycle makers and also one of the most innovative. Carlo Guzzi's first engine design, a horizontal single, defined Moto Guzzi's road-going motorcycles for the company's first 45 years. In the 1950s, Moto Guzzi experienced tremendous success in Grand Prix motorcycle racing. Today, Moto Guzzi has a higher profile than ever, thanks to its popularity among enthusiast celebrities like Ewan McGregor. This new edition of The Complete Book of Moto Guzzi includes a 100th anniversary introduction, new photography, and additional pages to cover the newest models from 2018 to 2020. All of Moto Guzzi’s production models are covered in detail, including the groundbreaking Falcone, the V-8 Grand Prix racers, the V7 Sport, the Ambassador, the Eldorado, the Le Mans, the Daytona, right up to today’s the complete range of modern bikes including the V7, Griso, Stelvio, and V9. Celebrate a century of iconic Moto Guzzi machines, model by stunning model.

The story of Moto Guzzi is a story of survival. As one of Italy’s oldest, and most legendary marques, Moto Guzzi had seen the height of success during the 1930s, and then the 1950s when they dominated 250 and 350cc Grand Prix racing. Their withdrawal from racing coincided with a period of stagnation until the company was sold to De Tomaso in 1973. During the 1970s the V7 Sport and Le Mans were at the forefront of the new superbike era, and later, with Dr John Wittner’s help, embraced contemporary technology with the 1000cc Daytona. If one aspect characterizes Moto Guzzi it is continuity. The great 500cc Falcone single ran from 1950 until 1976, and the V7, originally seeing the light of day in 1967, continued well into the 2010s. This continuity breeds loyalty, and Guzzi owners are a fiercely proud breed. Guzzis are not like other motorcycles, even Italian ones, and to qualify as a Guzzi owner requires a dedication and individuality that will be rewarded in a long term relationship. 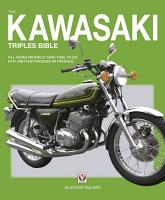 The Kawasaki Triples Bible covers the entire production of three cylinder two-strokes from 1967 to 1980, featuring a year by year breakdown of bike specs, including the KH250, 350 S2, KH400, H1 500 and H2 750 models. Illustrated with hundreds of archive photographs and period adverts, plus personal memories from some of the racers and tuners who got the best from the fearsome H1 500 and H2 750 machines of the 60s and 70s, this is an invaluable resource for any collector or restorer of these fabulous motorcycles. With information provided by Kawasaki Museum, acknowledged experts such as Rick Brett and Dave Marsden, and lifelong Kawasaki triples owners, it defines the enduring appeal of the models. It also contains excellent tips on spares, tuning, rebuilds etc., and captures the very essence of what made the Kawasaki triples the most rebellious, kick-ass two-strokes of their time.

Guzziology has been called the bible for owning, operating, maintaining, servicing, repairing, updating, and modifying Moto Guzzi motorcycles. It has been continually updated for over a quarter of a century. Author Dave Richardson has 34 years of experience working in Moto Guzzi dealerships. Guzziology has been purchased by Guzzisti in all 50 US states, all 10 Canadian provinces, all 7 continents (Yes, someone ordered a copy from Antarctica!), and over 40 countries. This is the latest version, Version 9.

The 2007 centenary of the Isle of Man Tourist Trophy launched the TT into a new era of success. In this book, Charlie Lambert – Manx Radio TT’s lead commentator – tells the story of this sensational upturn, from his own role behind the microphone, to the pressures, controversies, laughs and sadness that go with being the man at the heart of the world’s most famous motorcycle road race. 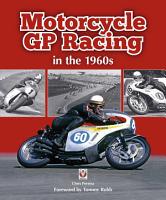 This book examines the classic period of Grand Prix racing from 1960 to 1969, and the men and machines involved. A fascinating exploration of the last decade of ‘traditional’ Grand Prix racing, before significant events changed the nature of the sport forever.

Following his dismissal from a job he never should have had, the author packs a tent, some snacks, and a suit, and sets out on a two-wheeled adventure across Europe. Includes maps and illustrations, hints and tips, places to stay, plus valuable first-hand guidance on what to do when things go wrong.

Few people have been as deeply involved in motorcycle sport as Chris Carter, a larger than life character and raconteur who was for a great number of years a journalist, commentator and broadcaster at the very top level of motorcycle sport. This memoir is a funny, fascinating and unique insider view of professional motorcycling over more than six decades. From scrambling in the 1960s, to four decades of international road racing - including Daytona and Macau - as well as trials and speedway. Packed with remarkable stories and amusing anecdotes, as well as interesting reflections and astute observations, it is a light-hearted, highly readable autobiography which lifts the lid on an extraordinary world. In past times, racing paddocks were open and friendly, and Chris felt part of a big, happy family. He lived cheek by jowl with the very top riders and shared their triumphs and tragedies; to many, he was a friend and confidante. Honest, frank and direct, Chris tells things exactly as they were, and provides insights into a fast disappearing world.

Until now, Gary Hocking was the only World Motorcycle Champion of his era without a book dedicated to his life. This book reveals Gary’s life in Rhodesia, how he was helped to become a World Champion, his dedication, and retirement at a young age – and the accident that cost him his life. 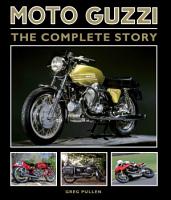 With the launch of the new California 1400 in 2013, and actor Ewan McGregor appointed brand ambassador, Moto Guzzi's owners Piaggio are proving their belief in the future and importance of Moto Guzzi. Moto Guzzi - The Complete Story charts the development of the stylish Guzzi bikes and the highs (and lows) of one of the oldest motorcycles marques still in existence. Topics covered include the origins of the Moto Guzzi factory at Madello del Lario - the oldest motorcycle factory in the world; the success at the Isle of man TT and races worldwide; the development of the V-twin engine; the De Tomaso years and the introduction of the iconic Le Mans model. The complete story of Moto Guzzi, from 1921 to the present day covers some very special motorcycles and some astonishing people who made it happen. Will be of great interest as a reference book to all motorbike enthusiasts and is superbly illustrated with 250 colour photographs. 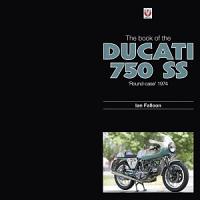 Although manufactured for only one year, 1974, the Ducati 750 Super Sport was immediately touted as a future classic. It was a pioneer motorcycle – expensive and rare, and produced by Ducati’s race department to celebrate victory in the 1972 Imola 200 Formula 750 race. Owing to its uniqueness and rarity, the 750 SS has become extremely expensive and desirable, fetching prices beyond the most expensive contemporary Ducati; for Ducatisti, it is the Holy Grail. 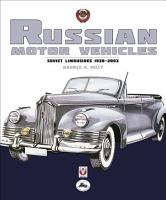 A book concerning Russian Limousines, and the Chinese models that were initially derived from them, has never been attempted before. This book investigates the whole story of why the Soviet Communist Party required such a bourgeois product, and how production was subsequently achieved. Following the orders of Stalin, work on the Limousines commenced during the first Five Year Plan (1927-1933) at the Putilov Works, late the Kirov Zavod, where the Leningrad L-1 was made in a limited number. From these beginnings, the Moscow and Gorky models emerged, and later the Chinese-derived types made with Russian aid during the late 1950s. Covering all of these models, up to the last one produced in 2003, and featuring full specifications translated from the relevant primary sources in Russian and Chinese literature, this is a meticulous and unique account of a previously neglected subject. 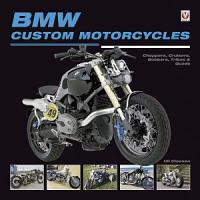 BMWs in custom guise – does it work? This book, the first of its kind solely devoted to the BMW custom bike scene, proves it does! Features stunning images of customized BMW singles, twins and fours from contributors around the globe, many complemented by owner’s stories and technical descriptions.