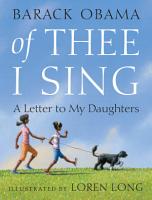 In this tender, beautiful letter to his daughters, President Barack Obama has written a moving tribute to thirteen groundbreaking Americans and the ideals that have shaped his nation. From the artistry of Georgia O'Keeffe, to the courage of Jackie Robinson, to the patriotism of George Washington, President Obama sees the traits of these heroes within his own children, and within all children. Breathtaking, evocative illustrations by award-winning artist Loren Long at once capture the personalities and achievements of these great Americans and the innocence and promise of childhood. This beautiful book celebrates the characteristics that unite all Americans, from the nation's founders to generations to come. It is about the potential within each of us to pursue our dreams and forge our own paths.

What’s your dream? Do you believe that God will answer your prayers so that you can fulfill that dream? Do you really believe that He is faithful? Unrealized dreams can cause deep pain that lasts for years. What takes away that pain? The journey through life is a learning process that each human must endure. I say endure because the learning is not always comfortable. You are not alone in anything you do. The lessons learned and talked about in this book can help anyone who is dealing with trouble, pain, human interaction, or faith. By reading this book, the author hopes you will learn a little about music, a little more about life, and a lot about the love of God.

Our definition of American patriotism needs to be expanded beyond national celebrations. Identifying four competing forms of patriotism--celebratory, mythic, active, and critical--allows us to rediscover forgotten histories and reframe familiar ones like the Revolution and the Civil War, and helps us analyze our 21st century debates over patriotism.

Our definition of American patriotism needs to be expanded beyond national celebrations. Identifying four competing forms of patriotism--celebratory, mythic, active, and critical--allows us to rediscover forgotten histories and reframe familiar ones like the Revolution and the Civil War, and helps us analyze our 21st century debates over patriotism.

Even as orchestras, performers, enthusiasts, and critics across the nation--and across the globe--celebrate the one-hundredth anniversary of his birth, George Gershwin (1898-1937) remains one of America's most popular yet least appreciated composers. True, he is loved and revered for his wonderful popular songs, a few instrumental works, and the majestic opera Porgy and Bess. But most of his music is virtually unknown; hundreds of compositions, Broadway show tunes, and even several large and important instrumental works are gradually disappearing with the generations that first heard them. The Gershwin Style: New Looks at the Music of George Gershwin is a bold new work that stands in opposition to this disappearance. It is also a fresh collection of essays that promises to make a key contribution to American music research. Editor Wayne Schneider has corralled some of the leading authorities of Gershwin's efforts--renowned experts and authors who have researched his music for years if not decades--and sets their work alongside articles by scholars who come to Gershwin for the first time from backgrounds in American music or popular music in general. The notable contributors include Wayne D. Shirley, Charles Hamm, Edward Jablonski, and Artis Wodehouse (who has transcribed nearly all of Gershwin's piano performances). No one who surveys the American musical landscape can doubt Gershwin's enduring popularity or profound influence, but his critical standing among today's serious music scholars is much less certain. As Schneider points out in his Introduction, there have been many biographies of Gershwin but comparatively few studies of his music in and of itself. Covering both the "popular" and "classical" extremes of Gershwin's output, as well as the many and subtle points in between, this book reevaluates the music of an American original from several enlightening perspectives. This is a book with much to offer any student or scholar of American music--while some essays explore new methods of measuring Gershwin's abilities as a composer, others draw on hitherto unavailable musical and archival sources to make arguments previously unthinkable. The essays gathered here, most of which were written especially for this volume, thus address a number of important research topics, among them biography, source studies, music analysis, performance practice, and questions of interpretation and reception. The contributions also reflect the wide diversity of contemporary thinking regarding the logic, legacy, and lure of Gershwin's music.

He discusses the well-known Rhapsody in Blue, Concerto in F, An American in Paris, and Porgy and Bess, as well as such popular songs as "Swanee," "'S Wonderful," "I Got Rhythm," "Love Walked In," and "Love Is Here to Stay." But he also examines relatively neglected works that are no less deserving, such as Second Rhapsody, Cuban Overture, and Pardon My English, the last of which, says Gilbert, was a failure on Broadway but was one of George and Ira Gershwin's finest collaborations.