In the dark of night, death casts a shadow... Edinburgh's toughest cop, Bob Skinner, looks into his past to assuage his demons in Quintin Jardine's thrilling mystery Grievous Angel. Perfect for fans of Ian Rankin and Peter James. Skinner revisits his nightmares: old but not forgotten. Fifteen years in the past, newly promoted Detective Superintendent Bob Skinner is called to investigate a most brutal death. A man lies at the deep end of an empty swimming pool, his neck broken and almost every other bone in his body shattered. Soon, an organised crime connection looms, and bloody retribution spreads to a second city. Then violence erupts on a new front, as a vicious knifeman seems to be targeting Edinburgh's gay population. As if this double dose of homicide isn't enough for a single man with a teenage daughter to raise and protect, Skinner's personal life takes a similar, perilous twist. Can he stay on the side of the angels, or will he fall...? What readers are saying about Grievous Angel: 'Fantastic! This is one of the best Skinners yet' 'The plots are intriguing and intricate and always suck me right in' 'Fast moving and very difficult to put down'

A portrait of the late country-rock performer, co-written by his daughter, draws on unpublished letters and interviews with artists whose work was inspired by Parsons, in an account that explores his lasting influence on music today. Original.

This four-volume work provides provocative critical analyses of 160 of the best popular music albums of the past 50 years, from the well-known and mainstream to the quirky and offbeat.

It has been twenty years since Justine Fraser last saw Nicky Bennet, twenty years since he abruptly took off for Hollywood. Justine cannot forget his offbeat charisma, his sly half-smile, or the time he surprised her by flying across the Atlantic to propose to her on a beach. But she also cannot forget the way he disappeared without a word of explanation. Now reports have surfaced that Nicky has vanished again, this time from the set of his next film, leaving behind a mysteriously cryptic note, which Justine is sure is a message to her. Against the advice of her friends, she sets off on a journey to America, to the past, and to Nicky, in search of the real reasons behind his disappearance. But what she will ultimately discover is the shocking and disturbing truth about her relationship with Nicky Bennet . . . which is not at all how she remembers it.

1964-1974 was a tumultuous decade. In the first two books of his ‘Music and Politics’ trilogy, Steve Millward traced how the optimism and adventure of 1964 had, by 1970, soured into frustration and uncertainty. Fast Forward: Music and Politics in 1974 brings the story to a climax by showing that while the year was riddled with soul-searching and looking backwards, the future was, in fact, approaching rapidly. As in the previous volumes, Millward links major political developments such as the energy crisis, Watergate, the troubles in Northern Ireland and the rise of the National Front to trends in rock, jazz, folk and classical music. He also explains the part played by music in the revolutions across Africa and in the struggle for civil rights in the USA. James Brown, Neil Young, David Bowie and Bob Marley are among the major names featured, but there is also discussion of the multitude of artists who made crucial but less celebrated contributions, including Millie Jackson, Steve Reich, Billy Cobham and even the poet laureate John Betjeman. Precursors of punk such as Patti Smith, The Ramones, Dr Feelgood and Kilburn and The High Roads are also examined in detail. Finally, Millward weaves into the plot sporting events like the World Cup and the Rumble in the Jungle and the host of excellent films released during the year. Fast Forward: Music and Politics in 1974 offers a multidimensional interpretation of a momentous year – analytical yet accessible, weighty yet witty – and is the perfect addition to any music-lover’s bookcase. It merits the accolade given by Record Collector magazine to its predecessor, Different Tracks (Matador, 2014) – ‘an incisive, all-inclusive discourse...a sharply-delineated time-capsule’. 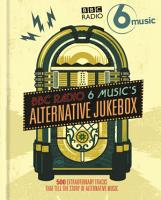 BBC Radio 6 Music is the station for people who are passionate about music: its award-winning presenters are constantly bringing a wealth of fresh tracks to the airwaves, from both new and established artists. In this book, BBC Radio 6 Music draws on its pool of knowledge and experience to provide an alternative offering to the mainstream music most radio stations play, bringing the reader an authoritative guide to 500 alternative classic songs and the stories behind them. Featuring contributions from the station's most popular DJs and producers - including Cerys Matthews, Craig Charles, Gilles Peterson and Huey Morgan - BBC Radio 6 Music's Alternative Jukebox is the perfect route to escaping the mainstream and discovering a world of unforgettable tracks. With choices of works by a diverse range of artists, such as Gil Scott-Heron, Gram Parsons, the Pixies and Ghostpoet, these are the songs that tell the story of alternative music.

Before he achieved his dream of being an internationally known rock personality, Ryan Adams had a band in Raleigh, North Carolina. Whiskeytown led the wave of insurgent-country bands that came of age with No Depression magazine in the mid-1990s, and for many people it defined the era. Adams was an irrepressible character, one of the signature personalities of his generation, and as a singer-songwriter he blew people away with a mature talent that belied his youth. David Menconi witnessed most of Whiskeytown's rocket ride to fame as the music critic for the Raleigh News & Observer, and in Ryan Adams, he tells the inside story of the singer's remarkable rise from hardscrabble origins to success with Whiskeytown, as well as Adams's post-Whiskeytown self-reinvention as a solo act. Menconi draws on early interviews with Adams, conversations with people close to him, and Adams's extensive online postings to capture the creative ferment that produced some of Adams's best music, including the albums Strangers Almanac and Heartbreaker. He reveals that, from the start, Ryan Adams had an absolutely determined sense of purpose and unshakable confidence in his own worth. At the same time, his inability to hold anything back, whether emotions or torrents of songs, often made Adams his own worst enemy, and Menconi recalls the excesses that almost, but never quite, derailed his career. Ryan Adams is a fascinating, multifaceted portrait of the artist as a young man, almost famous and still inventing himself, writing songs in a blaze of passion.