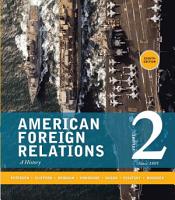 This best-selling text presents the best synthesis of current scholarship available to emphasize the theme of expansionism and its manifestations. Volume 2 includes recently declassified documents, and provides the opportunity to consider new perspectives on topics such as the American intervention in the Bolshevik Revolution, the origins of the Cold War and the Korean War, and the Cuban missile crisis. Important Notice: Media content referenced within the product description or the product text may not be available in the ebook version.

Designed to encourage critical thinking about history, this reader uses a carefully selected group of primary sources and analytical essays to allow students to test the interpretations of distinguished historians and draw their own conclusions about the history of American foreign policy. This text serves as an effective educational tool for courses on U.S. foreign policy, recent U.S. history, or 20th Century U.S. history. Some of the new literature spotlights cultural relations, and the ways in which culturally constructed attitudes about class, gender, race, and national identity have shaped American's perceptions of the world and subsequently its overseas relationships. In this volume, almost one-half of the essays are new, including selections by Laura McEnaney, Michael L. Krenn, Walter A. Hixson, Robert W. Tucker, Erez Manela, Victoria de Grazia, Thomas F. O'Brien, John Lewis Gaddis, Andrew J. Rotter, Chen Jian, Vladislov Zubok, Michelle Mart, Christina Klein, Randall Woods, Jeremi Suri, Carol Eisenberg, Salim Yaquib, Melvyn P. Leffler, Arne Odd Westad, and George C. Herring. This new edition includes expanded coverage of U.S. policy toward the Third World. New selections explore the U.S. presence in Latin America during the interwar era and the Middle East during the early Cold War and the era of detente. Others examine U.S. relations with Southeast Asia prior to U.S. military escalation in the Vietnam War and the negotiations pursued by the Richard Nixon administration to end that conflict. Recently released documents on Ronald Reagan's presidency and the end of the Cold War have also been added. Finally, the last chapter had been revised to focus on the administration of George W. Bush and its response to the terrorist attacks of September 11th, including the on-going wars in Iraq and Afghanistan. Important Notice: Media content referenced within the product description or the product text may not be available in the ebook version.

This best-selling text presents the best synthesis of current scholarship available to emphasize the theme of expansionism and its manifestations. The inclusion of recently declassified documents allows for new perspectives on American intervention in the Bolshevik Revolution, the origins of the Cold War and the Korean War, and the Cuban missile crisis. The Sixth Edition includes strong coverage of gender and culture and explores the racial dimensions of American expansionist ideology. Up-to-date coverage of national security and its implications allows students to examine the government's role in protecting citizens.

The text aims to uncover the roots of the United States' near perpetual involvement in war since the beginning of WWI in 1914. Using alliance politics as the main framework of analysis, it offers a new interpretation that contrasts with the traditional views that war is an interruption of the American foreign policy emphasis on diplomacy. Instead, it posits that war has been the norm during the past century while peaceful interludes were but a time of respite and preparation for the next conflict. After a thorough discussion of the concepts of alliance building and the containment doctrine, the work then addresses such themes as the alliance networks used to confront German and Japanese powers during the early 20th century wars, the role of alliances in containing the Soviet Union during the Cold War, the creation of alliances to restrict and defeat rogue state powers, and whether they were useful when dealing with the challenges posed by terrorism in the post-9/11 world. Each chapter features case studies, a summary, references, and web links. In addition, the book utilizes primary sources, such as U.S. Department of Defense and State documents and presidential statements. An exhaustive study of containment and alliance, this text will be an essential resource for anyone studying U.S. foreign policy, international relations, and national security. 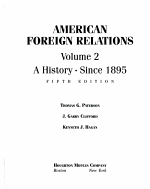 For almost half a century, the Iron Curtain had separated Americans and Russians by barriers of misunderstanding, suspicion and alienation. The accession of Mikhail Gorbachev to power in the mid-1980s signalled the beginning of a revolutionary stage in American-Soviet relations. In the course of the following two decades Americans and Russians would interact to an extent never anticipated and come to call each other partners, or even friends. The word friendship, however, is often used superficially. This book provides a more profound answer to the question of how, from the American perspective, the image of, and the relationship to, Russia have changed since the former adversary "opened its doors" to the West. Ullmann not only reveals how the American public's attitudes toward Russia or the scope of people-to-people contacts have changed, she also analyses to what extent Americans have been able to learn about Russia in the mass media and to what extent they have been interested in studying Russian culture and language.